Our favourite PR stunts of all time – and why they worked

While scrolling through your social media feeds in the last few weeks, the news of two creepy twins wandering around London may have caught your attention. The masked children dressed in scarecrow like outfits were spotted at tourist hotspots including Finsbury Park Tube Station, Buckingham Palace and Hamley’s Toy Store, minding their own business and scaring the life out of passers-by. 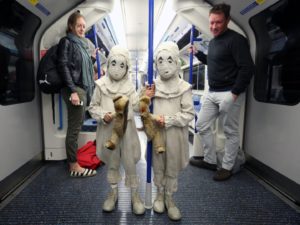 Unsurprisingly, bewildered commuters and tourists snapped pictures of the peculiar pair and took to Facebook, Twitter, Snapchat, Instagram and What’s App to share the bizarre scenes. Of course it was all a rather clever PR stunt to promote Tim Burton’s latest film, and like any great PR stunt, it stopped people in their tracks, got them talking and generated a ton of media coverage.

PR stunts are as old as the hills but what makes one great? We got chatting about our favourite PR stunts and why we think they worked.

1. Bing/Jay Z Decoded campaign – They had a strategy, and they stuck to it!
When New York Agency Droga5 were charged with creating a campaign for Microsoft Bing Maps at the same time as launching Jay-z’s first autobiography they decided to combine the two into one big idea.

Before the book’s launch they put every page into a real world location that in some way had a connection to the content on that page. So, while some pages were splashed on billboards, others turned up in less expected locations – like the bottom of the pool at Miami’s Delano Hotel, on pool tables and even wrapped around a Cadillac. The campaign also included a Bing Maps-enabled scavenger hunt, allowing the audience to uncover clues as to the location of each page.

Droga5 had a strategy for each of the 300 pages, had they just mass bought a load of media and thrown the pages up anywhere and everywhere it wouldn’t have made sense and it’s unlikely the campaign would have worked. Instead they won the Integrated Grand Prix and a Titanium Lion at Cannes. Hurrah!

2. Jaguar F Pace loop the loop – It broke records
Jaguar certainly made sure that its first family sports car made an entrance at its debut on the eve of the Frankfurt Motorshow in 2015. Rather than the usual ‘covers off’ unveiling of a new motor, Jaguar chose to show the world their new F-pace by taking it through the world’s largest loop the loop…and they broke a world record while they were at it.

3. FHM and Gail Porter – It was audacious
People love audacity, and clearly FHM magazine knew this when they decided to project a 100ft naked image of Gail Porter onto the Houses of Parliament in 1999.

4. Torches of Freedom – It caused controversy
We had to include the father of PR in our list. His 1920’s stunt which saw ‘suffragettes’ smoking in the Easter Parade in New York City caused controversy throughout America. It changed the opinion of cigarettes as being unladylike to being symbols in women’s minds of gender equality and liberty and doubled Lucky Strikes sale in 1929. In truth, it was an immoral mass manipulation of millions of people.

5. Red Bull’s stratospheric freefall – They had a captivating story
Red Bull’s stratospheric free fall was possibly the most extreme stunt in PR history. It took seven years of planning and unsurprisingly the mission suffered some setbacks, but Red Bull, championing transparency and honesty as the key to modern communications, chose to share their setbacks and experiences with their audience who in turn got behind the mission. Red Bull’s decision to broadcast the jump through a live stream on YouTube was also groundbreaking for PR.

6. Volvo Trucks and Claude Van Damme – It was just bizarre!
There’s trucks, a sunset, Van Damme doing the splits and a beautiful Enya backing track, what’s not to love! (they also did a fabulous job of demonstrating truck stability).

If you’re in the automotive industry and looking to upgrade your PR and marketing activities why not get in touch with Red Marlin to see what we can do for you?

What is brand authenticity?